Beneath the streets of the bustling city of Toronto is an underground world full of stores, restaurants, and other amenities that allow locals and visitors to shop, browse, dine, or just explore, without ever having to brave the outdoor elements.

Toronto’s PATH is the largest underground shopping complex in the world. With 27 kilometers (16 miles) of shopping concourses and 371,600 sq. meters (4 million sq. feet) of retail space, it rivals some of the world’s largest shopping malls.

PATH actually started as a very modest idea around the turn of the century. The first company to put in an underground “path” or tunnel was department store mogul Eaton, who decided to connect his flagship store with his bargain annex. The trend caught on. By 1917, there were five underground tunnels connecting various buildings, and when Union Station opened ten years later, they built a path to the posh Royal York Hotel so wintertime patrons wouldn’t have to emerge into Toronto’s cold and snowy weather to reach their accommodations. Tunnel building saw its biggest boom in the 1970s when a tunnel was built to connect the Richmond-Adelaide and Sheraton Centers. 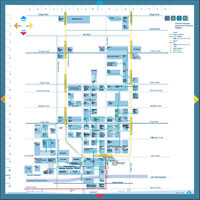 By the end of the 1980s, the city decided to assume management of PATH and worked to improve signage and other issues in the underground world, which was quickly becoming quite large and often difficult to navigate. Positive results of the city’s intervention included increased use of the underground area and the attraction of more businesses to the PATH “city”.

The PATH of the twenty-first century includes approximately 1,200 shops and services that employ in excess of 5,000 workers. More than fifty buildings/offices are connected through PATH. Twenty parking garages, five subway stations, two major department stores, six major hotels, and a railway terminal are also accessible through PATH. Tourist attractions such as the CN Tower and the Hockey Hall of Fame can also be reached underground.

There are more than 125 grade level access points to the tunnels. Signage is excellent and PATH has become much easier to navigate, with each letter of the word PATH signifying a different direction: the orange A directs pedestrians to the west, while the blue T directs them to the north. The H is yellow and points to the east and the red P indicates south. Frequent maps are posted throughout the complex.

PATH, with links to public transit, accommodates more than 100,000 daily commuters and countless numbers of visitors.