The Lincoln memorial is a monument honoring the 16th President of the United States, Abraham Lincoln.

Soon after Lincoln became president, seven southern states seceded in response to the president’s condemnation of slavery. One year later, four more states seceded and in April 1861 the Civil War started. During the war, Congress approved the 13th Amendment, abolishing slavery in the United States. The Civil War ended in April 1865 with the surrender of General Robert E. Lee. Six days later, Abraham Lincoln was shot by an assassin in Ford’s Theatre.

Two years after his assassination, Congress formed the Lincoln Monument Association. Its task was to build a memorial dedicated to Abraham Lincoln. It would take until 1901 before a site for the memorial was chosen. In 1911 the Lincoln Memorial Bill was signed by President Taft, providing $2 million funds for the memorial.

Construction started in 1914. The design by the New York architect Henry Bacon was based on a Greek temple with 36 Doric columns. Each column represents one state of the Union at the time of Lincoln’s death. When the memorial was completed in May 1922, the Union had expanded with 12 more states, so the names of the 48 states were carved on the outside of the memorial’s walls. After the admission of Alaska and Hawaii, a plaque was added with the names of the new states.

Inside the 99ft/30m tall marble temple is a large sculpture of Abraham Lincoln seated in a chair. The sculpture, designed by Daniel Chester French, was originally intended to be 10ft/3m tall. Henry Bacon realized the statue would be dwarfed inside the large building so the size was almost doubled to 19ft/5.8m. 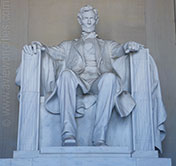 The northern wall contains an inscription of Lincoln’s second inaugural speech, the southern wall has the Gettysburg address inscribed, considered one of the most important speeches in American history. Above the inscription is a mural depicting the angel of truth freeing a slave.

The memorial is often used as a gathering place for protests and political rallies. The most famous was the March of Washington in 1963, when Martin Luther King delivered his famous speech ‘I have a dream’ from the Lincoln Memorial.

The Lincoln Memorial is located at the west end of the National Mall. From the top of the stairs in front of the memorial, you have a great view of the Washington Monument and the US Capitol.