The famed Galleria Vittorio Emanuele II is a magnificent shopping arcade in Milan, covered with a glass and iron roof. The interior of the impressive five story structure is decorated with patriotic mosaics and statues.

The triumphal arch
at night

In 1860 the local government of Milan launched a competition for the redevelopment of a historic area between the Cathedral and the Scala Opera House. A monumental design by the Bolognese architect Giuseppe Mengoni was selected. Mengoni had studied the historic shopping arcades in Paris and proposed a large scale, glass covered arcade to connect the square in front of the cathedral, Piazza del Duomo, with the newly created square in front of the opera house of Milan, Piazza della Scala.

The first stone was laid on March 7, 1865 by king Victor Emmanuel II, after whom the arcade is named. Despite lukewarm local support – even a lottery failed to raise enough money – the project went smoothly and the Galleria was officially inaugurated on September 15, 1867. Work continued for another ten years – mainly on the imposing triumphal entrance. The day before its completion in December 1877, Mengoni fell to his death from the top of the triumphal arch.

The Living Room of Milan

Mengoni lived long enough to see his creation become a major success. The Milanese, who initially opposed the construction of the Galleria since it destroyed a historic part of the city, quickly embraced the magnificent arcade and it was soon dubbed ‘Il Salotto di Milano’ – the living room of Milan – since the Galleria became the favored meeting place in the city. 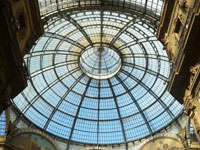 View of one of the facades
inside the gallery

The Galleria Vittorio Emanuele II is impressive if only for its dimensions: formed like a Latin cross, its longer walkway measures 196 meters long and the shorter one 105.5 meters (643 x 346 ft). The two iron and glass covered walkways meet at an octagonal central piazza below a grand forty-seven meter high (154 ft), thirty-six meter wide glass dome. The entrance from the Piazza del Duomo is framed by a monumental triumphal arch, drawing people from the square in front of the cathedral to the arcade.

The Galleria was constructed during the turbulent era of Italian unification and for its architect, the Galleria symbolized Italian unity and self-confidence, so it is no surprise that the arcade is decorated with plenty of patriotic symbols. Mosaics on the floor below the dome depict the coat of arms of Savoy and Italian cities are allegorically represented: a wolf for Rome, a lily for Florence, a bull for Turin and a white flag with red cross for Milan. Stepping with the heel of your foot on the genitals of the bull is supposed to bring good luck, so it’s no surprise that the mosaics have to be renovated on a regular basis.

Statues on the facades just below the glass roof of the arcade honor Italian artists and scientists. The four mosaics in the lunettes below the central dome represent four parts of the world: Europe, America, Africa and Asia. They were created in 1911 to replace the original frescoes that were already fading away.

Since it is one of Milan’s most popular attractions, the Galleria is constantly crowded with locals and tourists, the latter often snapping pictures or gazing at the spectacular architecture. Others window-shop at the upscale stores or take a break at one of the Galleria’s cafés and restaurants. The most famous is the Savini, a prestigious restaurant.
Scroll to Top