MAS is a municipal museum housed in a modern tower, built in 2010 at a prominent site between two docks. The museum focuses on the city’s storied history, from the early Middle Ages to today.

The new museum was created by combining several collections related to Antwerp’s history that were scattered over the city.

The first stone of this iconic tower was laid on September 14, 2006. The close to 62 meter (203 ft.) tall building, a beacon between the city and the harbor, was designed by the Dutch architectural firm of Neutelings Riedijk. It was built on the site of an old, rundown warehouse that was prominently located between two of the city’s oldest docks: the Willemdok and Napoleondok. Construction of the tower was completed in 2010 and the museum opened to the public on May 17, 2011.

Front view
of the tower

‘handjes’ on the facade

The tower is conceived of stacked ‘boxes’ echoing the ubiquitous warehouses in this maritime neighborhood. The boxes are arranged in such a way that they form a spiraling tower. The spiraling band of red Indian sandstone indicates the sections where the museum houses its thematic displays. The wavy glass spiral shows the path of the so-called ‘boulevard’.

Starting at the ground floor, the boulevard – a series of elevators – bring visitors to the top floor. The boulevard is separate from the museum and can be freely visited until midnight. A staircase leads all the way to the rooftop, from where you have a great 360 degrees view over the harbor and the north part of the city.

The exterior of the building is decorated with 3.185 aluminum hands (handjes), a symbol of the city of Antwerp (see the legend of Brabo).

The modern tower of the MAS is located at the site of the former Hanzehuis, an enormous palatial building that was erected here between 1564 and 1568 as the regional headquarters and warehouse of the Hanseatic League (Hanse), a powerful alliance of trading cities in northeastern Europe. 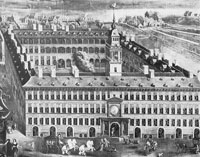 The complex, locally known as the “Oosters Huis” (house of the east) had five floors and was 80 meters long and 60 meters wide (197 x 263 ft), making it one of the largest buildings in the city. It was designed by Floris de Vriendt, the architect of the magnificent city hall. The Hanzehuis was decorated as lavishly as the latter, with ornamented portals, a central tower, balconies and arcades.

After the fall of Antwerp in 1585 the Hanse left the city. The building was used as a barracks and hospital and served other purposes until 1893 when a fire destroyed the magnificent complex.

The MAS – short for “Museum Aan de Stroom” (museum at the river) – displays the combined collections of the Maritime, Flemish Folklore and Ethnographic Museums as well as some other city collections, in total almost half a million artifacts.

The displays are spread out over five levels, starting at the fourth floor. Each level has a specific theme.

A large part of the diverse collection tells the story of Antwerp’s history, from its growth during the Middles Ages over its Golden Age in the sixteenth century – when it was one of Europe’s largest and most powerful cities – to today’s modern metropolis. But there are also displays on other subjects, such as ‘life and death’, which includes a fascinating display of pre-Columbian art.

At the Hanzestedenplaats in front of the MAS, a new sunken esplanade was created, known as the museumplein (Museum Square). The square is decorated with a large mosaic created by Luc Tuymans, a local contemporary artist best known for his figurative paintings. The stone mosaic, which measures 40 by 40 meters, is entitled ‘Dead Skull’. Its design is based on a memorial stone found on the facade of the Cathedral‘s north tower. It commemorates Quinten Matsys, an early sixteenth-century Flemish painter. The mosaic is best seen from above, so make sure you look straight down when you walk along the boulevard of the MAS.